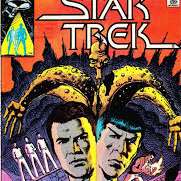 This time on the Couch: Mike, James, and Shée accept their 37-minute mission to explore 1980's Star Trek no. 7! Kirk, Spock, and the gang discover a race of freakish french fry people who are about to die from radiation poisoning and decide to stick their phasers where they don't belong by ignoring the Prime Directive and rescuing the adorable schmucks. And schmucks they do indeed be, as they refuse to leave for reasons they don't feel like explaining. Supposedly it has something to do with a time paradox, but probably they're just lazy. Plus, Scotty burns his hands hotwiring the transporter, James doesn't know when someone's wearing a wig, and Marvel Comics implies that Spider-Woman is aroused by word puzzles intended for children. (Credit to The Sihd for outro music.)