A World Made of War 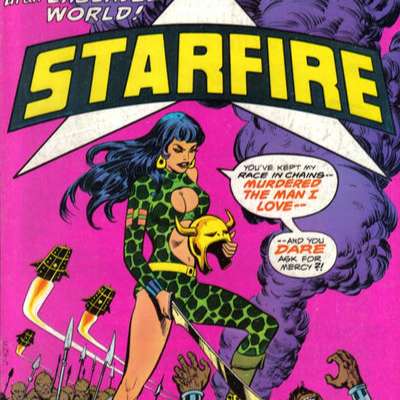 This time on the Couch: Mike, James, and Shée visit yet another goddamn dystopian future when they read 1976's Starfire no. 1! Don't get too excited, though; It's not the Starfire you've heard of, but instead some lady you've never seen before who's trapped in a confusing world of lizard monsters, child brides, and "unfamiliar rods"! Her only friend is eternal good-guy Dagan, to whom Starfire is unwaveringly devoted. Dagan stays virtuous through all temptation, even though you have to assume he's wishing he would've left a little more space in the crotch when he was sewing his pantaloons. Dagan dies on the rack having never gotten even a little and Starfire devotes the rest of her life to blowing off her frustration by killing tyrant space lizards. It just goes to show that, when aimed correctly, sexual repression is like an unstoppable canon of justice, which is why Darkseid's Couch officially endorses raising the age of consent to 30.