The Dentist in the Iron Mask! 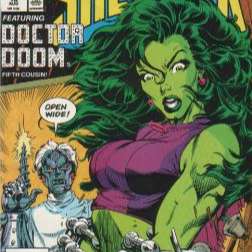 This time on the Couch: Mike, James, and Shée meet the Jade Giantess herself in 1990's Sensational She-Hulk no. 18! Created as a copyright-protecting security measure, Shulkie outgrew her modest origins to eventually... fight a dentist. It's a canon-irrelevant fill-in issue where She-Hulk has to put up with the whining of Dr. Doom's fifth cousin Bob, a successful dentist who won't be satisfied til he has his own country as well. Honestly, that's just a really naive thing to want: Think of the maintenance costs, the zoning laws, the periodic purgings... Everybody knows you don't want to own a country, you just want to be friends with the guy who owns a country. Also, remember that time Dr. Doom cried about 9/11? Don't let the mainstream media tell you it didn't happen.