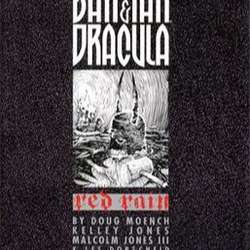 This time on the Couch: Mike, James, and Shée celebrate their 90th episodes with the spookiest Batman of all, as the Dark Knight meets Dracula in 1991's Red Rain graphic novel! It's an era of giant ears and bulbous double-chins as deranged artist Kelley Jones creepifies this tale of two creatures of the night clashing over the best way to not help the homeless of Gotham City! Dracula wants to turn them into his villainous army of the undead, while Batman prefers to just ignore them entirely. As if that wasn't enough, some vampire lady has been sneaking into Bruce Wayne's bed at night and fondling him while he's asleep, which is definitely going to be a major topic in therapy after he suffers from the total psychological collapse we all know is coming any day now. Plus, was Red Rain always a Peter Gabriel song? It used to be Sting, right? It definitely used to be Sting. Must be the Mandela Effect.